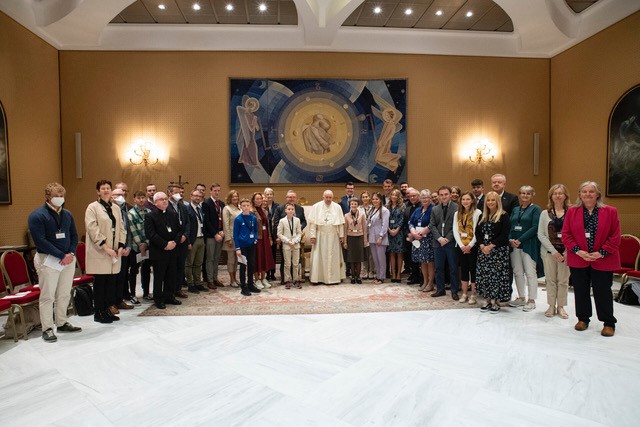 Global Researchers Advancing Catholic Education (G.R.A.C.E.) is an international research-based partnership between Mary Immaculate College Limerick, Boston College, United States, the University of Notre Dame Fremantle, Australia, and St Mary’s University in Twickenham, London. G.R.A.C.E. also works in partnership with O.I.E.C. (International Office of Catholic Education). As an emerging community of practice (Wenger, 2000), G.R.A.C.E. provides an original opportunity for scholars of Catholic education and theology in our respective countries to affirm, study, collaborate, and respond meaningfully to challenges we face in the field.

Toward this end, the initiatives of G.R.A.C.E. are as follows:

The group stayed at the Summer residence of the English College, located at La Palazzola.  La Palazzola is set in the hills, south of Rome, high up above the extinct volcanic Lago Albano, across the lake from Castelgandolfo.  There the group took part in workshops and and group discussions on Catholic Education.

On the Wednesday of the pilgrimage the group had an audience with Pope Francis at the Vatican.  This was a special moment for all and the highlight of the pilgrimage.  They also attended a meeting at the Vatican Dicastery for Education.  Dr Melanie Rosenbaum from the Congregation for Catholic Education hosted this gathering, she asked the group to share their challenges in relation to Catholic Education in Ireland.

After this the group travelled to the Irish College in Rome for lunch.  After lunch  they attended a talk by Sr. Patricia Murray IBVM, the Executive Secretary of the International Union of Superiors General.  After this input the group were given a tour of the Irish College.  They then walked to the church of San Clemente where Fr Paul Lawlor, a Dominican from Kerry, led the group around this extraordinary site of Christian worship.

The Thursday and Friday consisted of workshops, seminars and liturgy at La Palazzola, the group travelled back to Ireland on the Saturday, April 23rd.