The Pastoral Area of (name) is made up of the parishes of (parish names); who co-operate with one another for the benefit of all the faith community in this pastoral area.

A Vicar Forane supports and co-ordinates pastoral planning in this pastoral area.

The Pastoral Area Council works in collaboration with the VF, to implement the mission of the Pastoral Area.
1. Members
a. Members shall be baptised Catholics who participate in the life and worship of their parish and/or pastoral area.
b. Members undertake to be representative of the whole community and focus on what is best for the whole pastoral area, and not simply just for individual parishes or groups.
c. Members shall make themselves available to attend a minimum of three meetings in the space of one year, and on-going formation and training as organised for the area pastoral council.
2. Pastoral Area Council membership
a. The council should consist of no less than ten, and no more than twenty-five members.
b. To ensure effective communication and decision making, each parish shall ensure that at least one of their representatives is a member of their Parish Pastoral Council
c. Priests assigned to minister within the Pastoral Area are ex-officio members of the Area Pastoral Council
d. The Pastoral Area team may co-opt further members on an ad-hoc basis where relevant talents and experience are needed.
3. Term of Office
a. Members of the council are appointed for a three year term. Non ex officio members shall serve no more than six consecutive years on the council. While former members are very welcome to serve again, there should be a minimum gap of three years between memberships.
b. It is the council’s responsibility to stagger the turnover of membership, so as to ensure continuity of service.
4. Officers
The team shall have three officers: Vicar Forane, chairperson, and secretary. Members may serve a maximum of four years as either chairperson or secretary during their time with the area pastoral council.

Vicar Forane
The Vicar Forane has been entrusted with the care of the Pastoral Area by the bishop; he convokes the meetings and presides at them. The area pastoral council may not make decisions in the absence of the VF or his delegate.

Secretary
The secretary is responsible for keeping a record of the meetings of the council and for circulating, in advance of meetings, relevant material to the area pastoral council members.

This webinar celebrates Mission “We cannot but speak ... Read More 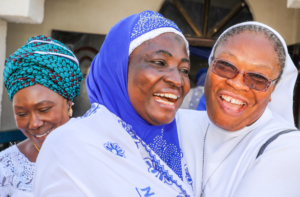