Kerry Diocese has a rich spiritual and Christian heritage.

Most parishes can boast signs of Christian civilisation going back to the time of St. Brendan in the Fifth Century.  Holy wells, mass rocks and church ruins can be found in abundance.

When the bishops and clergy met at Rathbreasail in 1111 to reorganise the Church in Ireland, they established the Diocese of Ráith Maighe Deiscirt, which was co-extensive with the area of Iarmhumha. At the Synod of Kells in 1152, however, the corresponding diocese was called Ardfert, a title that was retained until modern times, when the diocese became known as Kerry. The great cathedral at Ardfert, built on the site of a previous church, became the seat of the local bishop. The first reference to the diocese in a papal document is in a letter of 1200 in which Pope Innocent 111 instructs the Archbishop of Armagh with the bishops of Kilmacduagh and Clonfert to install the legitimate bishop and to expel an intruder whose election was canonically null. 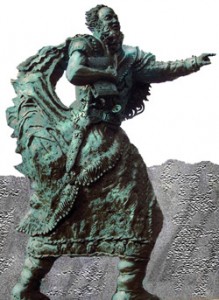 The twelfth and following centuries saw the introduction of several new religious orders in the diocese. The Cistercians founded an abbey at Odorney, the Canons Regular of St. Augustine founded abbeys at Rattoo and Killaha, the Dominicans founded a priory in Tralee and the Franciscans established friaries at Ardfert, Muckross and Lislaughtin. These added a new dimension to the Church in the diocese. Due to the influence of the Normans, one notes the prominence of non-Gaelic names amongst many of the pre-Reformation bishops – de Valle, Ball, Fitmaurice, Stack and Fitzgerald.

A change took place in the aftermath of the Reformation. All the abbeys and friaries were confiscated and a new type of priest and bishop appeared.

Following the Council of Trent (1545-63) Irish colleges were established on the Continent to train priests for the Irish mission. The first continental trained bishop to be appointed to the Diocese of Arfert was Rickard O’ Connell., provided in 1641 and consecrated two years later. He was a native of Iveragh and was educated in France and in Spain. After his appointment as bishop he lived in Killarney, the first bishop of Ardfert to do so. In the 1640s he established a seminary in Tralee. Amongst those who taught there were Tadhg Moriarty op, Conor McCarthy pp, Killeentierna, and Francis O’ Sullivan OFM. These three priests were martyred by the Cronwellians and their causes for beatification are being examined in Rome. Unfortunately Rickard O’ Connell’s initiative failed. After his death in 1653 the diocese was ruled by vicars apostolic. In 1667 Denis Moriarty was proposed for promotion to the See of Arfert.

However, due to strong opposition from some clergy and gentry the appointment was delayed until 1720, by which time he was sixty-eight years old. He died in 1737.

In the early years of the eighteenth century the Penal Laws were enforced. In 1704 all Catholic clergy in the diocese had to register before a clerk of the peace, say where they were ordained and name the parishes under their care. Each parish was to have only one priest. Severe penalties were laid down to punish those who broke this law. This did not, however, deter other priests from ministering to the people. Although the Penal Laws may not have been enforced as rigorously after 1745, there were few enough churches in the diocese. Of those that did exist, most were just mud walled buildings with thatched roofs. This situation gave rise to the custom of the ‘ Station Mass’. The lot of the clergy was no better. Bishop Niccholas Madgett built a house in Tralee, where he lived for £16-3-10. It wasn’t until the nineteenth century that most of the churches were built with stone and roofed with slate.

The early years of the nineteenth century saw an improvement in the life of the Church in the diocese. Cornelius Egan, who had been in charge of an ecclesiastical seminary that his predecessor had established in Killarney about 1803, succeeded Bishop Sughrue in 1824. During Bishop Egan’s episcopate he founded eight convents and built many schools. He was a great pastoral bishop, spending many hours hearing confessions. He witnessed the tragedy that hit the people of the diocese during the Great Famine of 1845-49, when at least a fifth of its population died or emigrated. Six priests died form disease, caught while administering to the sick and dying. Others helped to organise food depots, while the nuns distributed what they could from their own kitchens. Bishop Egan made the, as yet, unfinished cathedral available to the destitute. During his latter years he suffered from ill health. In 1853 he petitioned Rome for a coadjutor. David Moriarty was appointed. On the death of Charles Sughrue in 1856, Moriarty automatically succeeded as Bishop of Kerry, as the diocese was now called. He was one of the great bishops of his day. He had been president of All Hallows College, Dublin and was responsible, to a large degree, for its rise as one of the foremost ecclesiastical colleges in the English –speaking world. As Bishop of Kerry, David Moriarty travelled the length and breath of the diocese administering the sacraments and preaching to the people. He was a strong advocate of the national-school system of education and a firm believer in its role in catechising the children. David Moriarty built St. Brendan’s seminary, which would supply hundreds of students for the priesthood for the home and foreign missions. He invited the Franciscans and Dominicans to return to Kerry. He was a great believer in the benefits that flowed from parish missions. Under his guidance a major church-building programme was undertaken. He completed the work on the present cathedral, dedicated to Mary in 1855. The church in Kerry had found its feet. David Moriarty had laid the foundation on which his successors could build.

Horizons at 9 on Radio Kerry followed by Mass

Dream, Hope and Celebrate is the title of ... Read More