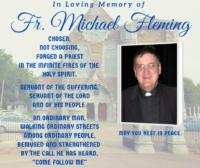 Fr. Michael Fleming, parish priest, of  Killorglin and formerly of Scartaglen  died last Friday, the 8th of May.

Fr. Michael is deeply regretted by his brothers and sisters: Mai Fleming, Killarney; Eileen Carew, Tipperary;  Patrick, New Jersey;  Sr De Lourdes, Mercy Sisters, Tralee and Sr Angela, Mercy Sisters, Clonakilty.  Fr Michael will be sadly missed by all of his extended family, friends and the many communities he was part of including the diocesan community.

Michael Fleming was born in Scartaglin in 1946. He attended St. Brendan’s, Killarney and then St. Patrick’s College Maynooth.  On ordination, in 1971, he spent one year in Dingle followed by another in Waterville as curate. In 1973 he went to London as an Irish Emigrant Chaplain in Westminster diocese.  He returned to Glenflesk as curate in 1977 and then in 1983 he went to Tralee, Our Lady and St. Brendan’s parish. From 1986  to 2001 he was Killarney based,  as Diocesan Secretary, as Director of CMAC and  Director of Family Ministry in the diocese . He moved to Moyvane as parish priest in 2001. His final parish was Killorglin  2003 to 2020.

A Memorial Mass will be celebrated at a later date which all can attend.

He was a big man in every way, big in stature, big of heart. He loved life, he had a good sense of fun and a commanding presence. He was truly a man of God and a man of the people. He loved the pastoral ministry and he had a great sense of the diocese.

Jesus, Risen Lord, filled with gratitude for his life among us, we pray

In Your Mercy share with him your victory over death.

On Friday 8th May, the people of Killorglin woke to the news that their beloved parish priest, Canon Michael Fleming had passed away during the night.  Fr Michael had been our parish priest for seventeen years, walking alongside us in good days and bad.  A larger than life figure, he was full of kindness and compassion for those who were pained by the struggles of life.  He accompanied so many of us during our times of sorrow in a silent and unassuming way, with no desire for recognition or reward.  He was consistently loyal to his parishioners keeping a keen eye on us, ready to befriend when we needed his support.  He was a servant leader, who broke bread humbly with those he had been called to serve.

He was a no-frills type of priest – what you saw is what you got – he had a congruity like no one else I have known.  Yes meant yes and equally no meant no when issues were debated or discussed around the meeting table.  A man of few words, when he spoke there was wisdom and depth in what he shared.  His devious sense of humour defused many a heated exchange.

Fr Michael was a man of deep faith, prayerful and reflective.  He gave his life to God and to the service of others.  He was an Emmaus Christ figure for those he served, taking many a step on the journey of life with those who needed a companion, a kind word, an offer of reassurance that in time all would be well again.  He gave without measure, with a selflessness and graciousness that one could not help but notice.

But above all, I think Fr Michael was a man of the people, with a deep and generous heart and a caring spirit.  He was a pair of steady hands and he steered our parish with strength and conviction for seventeen years.  He was our priest, our leader and our friend.  We are all the poorer for his loss.

Rest in peace Fr Michael, you have fought the good fight and you have finished the race.

Carols in the Cathedral