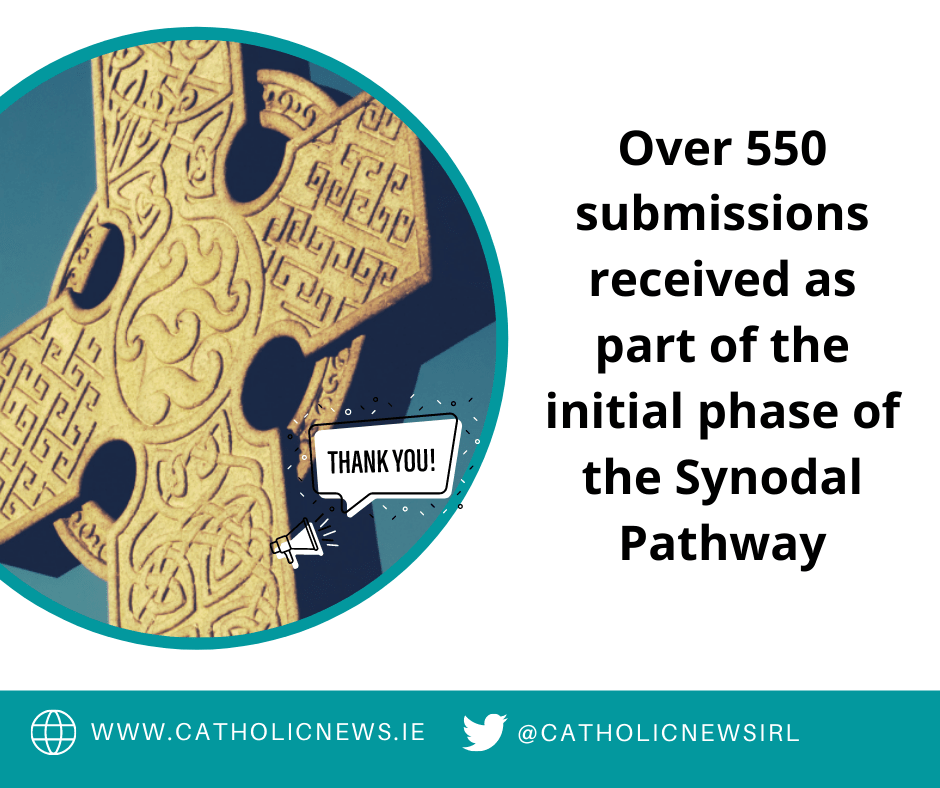 Over 550 submissions were received in response to the question, “What would be your preferred option for engagement in a conversation process about the Synod? Earlier this year, in Spring 2021, the Irish bishops announced that a new Synodal Pathway for the Catholic Church in Ireland is to take place, leading to the holding of a national synodal assembly, or assemblies, within the next five years.  At their meeting this week, bishops expressed their thanks for the submissions received from the public. We have begun to take the first steps in the initial phase of the Synodal Pathway.

By a happy coincidence, these first two years of our Synodal Pathway in Ireland will complement the Catholic Church’s worldwide journey towards the XVI Ordinary General Assembly of Bishops in Rome entitled, For a synodal Church: communion, participation and mission.  Pope Francis will officially launch the Universal Synod, October 9 and 10 and has asked that the whole Church prepare for this Synod which is scheduled to take place in Rome in October 2023.

Following her appointment, Dr Brady said, “The Synodal Pathway is an important and hope-filled development in the life of the Catholic Church in Ireland and I am grateful for the opportunity to help guide and shape this work.”

Dr Nicola Brady is the General Secretary of the Irish Council of Churches and Joint Secretary of the Irish Inter-Church Meeting where she facilitates relationship-building between Christian Churches on the island of Ireland and collaborative action on issues of shared concern to member Churches.  Nicola holds a BA in European Studies from Trinity College Dublin. Her PhD, also from Trinity, examined the response of the Catholic hierarchy to political violence in Northern Ireland (1921-1973) and to the Basque Country (1936-1975).  Nicola has particular expertise in the area of faith-based peace-building on the island of Ireland and internationally, including human rights advocacy, support to victims/survivors, facilitation of civic dialogue, community engagement with policing, and research across a broad range of issues relevant to reconciliation.  Nicola is a Director of Christian Aid Ireland and the Maximilian Kolbe Foundation, which works to extend the lessons of German-Polish reconciliation post-World War II to other conflict areas.  In 2017 Nicola took part in an international workshop organised by the Catholic Bishops of Germany and Colombia to support the peace process in Colombia, engaging with victims and survivors, armed actors, NGOs and faith communities.  In 2019 Nicola became an Eisenhower Fellow and undertook a professional development programme in the US with a focus on developing the capacity of the faith sector to promote social cohesion in communities divided by race, violence, political polarisation and socio-economic inequality.  Recent publications include The Churches, Reconciliation and Addressing the Legacy of Intercommunal Violence in Northern Ireland, Glencree Journal (2021), 92-102 — co-authored with Dr Gladys Ganiel, Queen’s University Belfast; and Pulling Together or Pulling Apart: Perspectives on Nationhood, Identity and Belonging in Europe (Peter Lang, 2019) — co-edited with Dr Susana Bayó Belenguer, Trinity College Dublin.