The Diocese of Kerry has become the first Catholic diocese to be awarded an Eco-Award from Eco-Congregation Ireland, an inter-denominational environmental organization representing five different churches. The Eco-Award was given to Kerry Diocese in recognition of the impressive work done by several parishes during Diocese of Kerry Earth Week 2011.
The award, a wooden plaque made from a recycled church pew with the words ‘Caring for God’s Creation’, was presented to Bishop Bill Murphy on Sunday the 20th of May at St Brendan’s College Killarney by Sr Catherine Brennan SSL. Sr Catherine is the Chairperson of Eco-Congregation Ireland and its Catholic representative.
Certificates of Excellence were also given to representatives from each of the nineteen parishes. The work carried out included Harvest Masses, discussion groups, traditional butter making, walks, blessing of animals, getting to know the night sky, planting of bulbs and trees etc. A certificate also went to Ardfert Retreat Centre and Milltown Presentation Secondary School, whose Transition Year students produced a clever, thought-provoking and emotive slide-show called ‘The Beauty of Creation’.
Bishop Murphy in his address said that respect for creation and the environment is “an essential part of the Gospel” and reminded us that we are “stewards” of God’s creation. He commended Sr Regina O’Connell and the Kerry Diocesan Justice Peace and Integrity of Creation Committee, who spearheaded the work for Earth Week, and gave particular credit to Sylvia Thompson for her “trojan work”.
Sr Catherine singled out the people of Killorglin, where the Catholic and Church of Ireland parishes worked together and where an all-night earth vigil, which included twelve teenagers, was held. She quoted American poet Adrienne Rich who exhorted us to “reconstitue the world” and suggested that this is part of “truly being witnesses to Jesus”.
Eco-Congregation Ireland has members from the Church of Ireland, Methodist, Presbyterian, Catholic Church and the Society of Friends. Its aim is “to encourage churches to celebrate the gift of God’s creation, to recognize the interdependence of all creation, and to care for it in their life and mission and through the members’ personal lifestyles”. 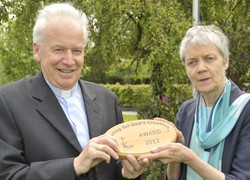 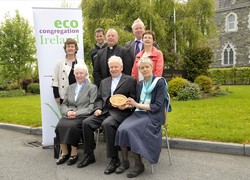 Bishop Bill, Sr Catherine and members of the JPIC Committee