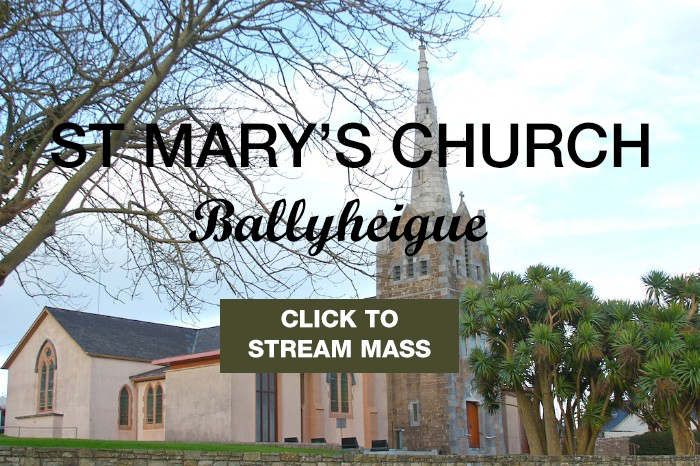 ABOUT THE WELL
The Well is located near the village, in the townland of Dirtane, a place which is closely bound up with the social and spiritual life of the parish. The well has long been a place of pilgrimage, and the statue and grotto were installed in the 1940’s by a local group. The initiative was inspired by the gratitude of a Ballyheigue nun in Australia who said she had received her vocation there. Fr. Behan was enthusiastic in support of the improvements and celebrated mass there for the first time, on 8th September 1935.
More improvements were carried out by Fr. James Enright in the 1960’s. The site was landscaped, and paths and sunken gardens added, with religious symbolism linked to specific locations. The sunken gardens represented the Garden of Eden, and the raised flower beds represented Mount Sinai and Mount Tabor. Shelters were built and an altar of Valentia slate was provided as a gift from the people of Fr. Enright’s previous parish of Valentia Island.
Water from the well is regarded as having special properties and a cup or bowl is left there for people to drink from. The water is also used to bathe the face or hands and rub on injuries. There is no doubt that people have been affected in different ways by visits to this well, and the continuing popularity of the Pattern Day, testifies this. It is a place of meditation, consolation and thanksgiving which has brought hope and strength to people at times of crisis. Many small personal miracles have occurred there-and occasionally one that made the news. In May 2011, an 85-year old Dublin man named Jack Leonard made newspaper headlines when he found that a visit to Our Lady’s well resulted in him recovering from a respiratory illness.

The parish of Ballyheigue is served by the priests of the Naomh Bhréanainn Pastoral Area, with Fr. Brendan Walsh as Moderator

The Assumption of The Blessed Virgin Mary14th-15th August 2021

Weekdays as announced in Newsletter.

Confessions as announced in Newsletter

Radio Kerry with the Horizons team is gathering ... Read More