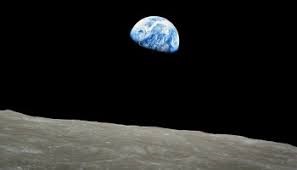 Even though we are presently confined to our homes we can still mark this years Earth Day.  We can all play our part by clicking on to the Earthrise short movie, reading Pope Francis’ address to his General Audience and registering to celebrate Laudato Si Week taking place from the 16th to 24th of May.

Last week saw the celebration of the world’s 50th Earth Day. This year was marked in many ways, which included the film Earthrise, featured by Emergence Magazine. Earthrise tells the story of the first image captured of the Earth from space in 1968. Told solely by the Apollo 8 astronauts, the film recounts their experiences and memories and explores the beauty, awe, and grandeur of the Earth against the blackness of space. This iconic image had a powerful impact on the astronauts and the world, offering a perspective that transcended national, political, and religious boundaries. Told 50 years later, Earthrise compels us to remember this shift and to reflect on the Earth as a shared home. To watch this short film, clink this link: Earthrise Well worth the view!

Pope Francis marked the day by offered a Catechesis at his General Audience calling for a renewing of our commitment to love and care for our common home and for the weaker members of our human family. To read this address click  General Audience

For his encyclical’s fifth anniversary, he also invites you to register to celebrate Laudato Si’ Week, to take place 16th  to 24th  May 2020

In its origin Earth Day was a unified response to an environment in crisis — oil spills, smog, rivers so polluted they literally caught fire.

On April 22, 1970, 20 million Americans — 10% of the U.S. population at the time — took to the streets, college campuses and hundreds of cities to protest environmental ignorance and demand a new way forward for our planet.

The first Earth Day is credited with launching the modern environmental movement, and is now recognized as the planet’s largest civic event.

Earth day’s mission is to build the world’s largest environmental movement to drive transformative change for people and planet.

Anne Alcock leads us through a beautifully written ... Read More

Never a dull moment with Fr. Tom Looney Horizons at 9 on Sunday morning

Our second annual Faith Camp in Killarney had ... Read More

Back in Barraduff with Trócaire – Martina O Donoghue

Martina O Donoghue has worked with Trócaire for ... Read More